I lost my password to my other page,, after My church mother died Mother Lucuille Haskins My pastor wife of 47 years,, i been with that church for 40 yrs went every day for 36 years Holyness teaching,, So I had to make a new page.. and I have to try to figure out all my friends I been with since 2007 as I was invited by evanglist felecia spalding,, and Dr Teloria williams who has been sending me prayers faithufl and the encouragung word of Minister Smith and his family,,

I am greatful To The living god,,On my other page their were members of the occult who made a page and disguised themselves as a saint they change their picture after some time and started harrassing me spiritually and physically,, and my daughter and even on facebook, they made these threats for me to shutup and stop talking about how much I love god and my church family,,, I told my church family and missionaries and Pastor, I am learning that racism is not only physical but spiritual also ,, the members of the occult are putting spells and spirits in youtube video of Black ministers,, to spiritually harrass and intimidate,, mentally and physically..

So these five whiet men call themselves spiritually harassing me and one of them astroproject himselves in my home and a female both of white race and they harrass the children spiritually ,, also ,, This white male calls himself invoking curses and spells of the occult on me sometimes during sleep so we have video that we are going to show on youtube as weve been recording...This hass been going on for some time,, at a church meeting during bible study me and church members talked about it and with another church ,, how they are trying to invoke evil on Black people and police shooting to kill them as sacrifices and rituals,, for the blood of black women men and children,,

so some of them are in the downtown seattle area ,, as several of my friends veiwed them as they were stalking me ,, and my friends followed behind a distance to see them and took several pictures,,

so This white male who astro projects calls his self putting marks on me spiritually ,,  and here is what god has to say if you are experiencong this,,

and fear not them which kill the body but are not able to kill the soul but rather.fear him which is able to destroy both soul and body..

Because there is wrath beware lest he take thee away with his stroke then a great ransom, cannot deliver

So These white men and there is a particular one,, who astroprojects him and a white female she has a dog,, and since we have members who can see them by discerment and if you ever been in a cogic church ,, where the fullness of the holyghost falls you know what discernment is,, so we had those who could draw draw there faces and images,, some friends of mine retired in early 90 from military police and others...

Since my  Heart has been with god since age 5 I reject anything of flesh and those who practice santanic rituals,, and all evils,, I always hated evil and I always tried to find ways to destroy evils works even as a child,, as the evils of witchcraft is more wicked in the south since Indigent  Black people dont really disclose everything  about the evils of the south ,,as white people do and rich celebrities tell you all evil secrets of all their societies,, and their rituals and everything u need to know so defeating evil is easy and white people like astroporjection but black people arent really interested because we dont like going where certain things are physically nor would we spiritually,,

but since I grew up in the south and I knew secret of dirt roads and I was told as  other young people growing up not to talk about it,, But white people they have this white privilege things especially those who are racist,, and this isnt to offend anyone.. but to inform church members that there spiritual harrassment among white where they astroproject to try to force things on you even while you sleeping... but no one can make you evil because god made the heart so no one could discover what in it,,

I dont mind dying for christ or pleading the blood of jesus of calling the holy spirit or the holy lamb of jesus christ..or dying for my church and pastor ,

There is nothing better than the deep anoiting of the holyspirit and the pure redemption in pureholyness form  that cannot be copied,, thats spirit is a sweet spirit no human can give you but the feeling satisfys the mind soul body and everything spiritual in you and take you to a new level of understanding of who god is,, expereinced mostly in the old fashion church..

you see the evil of this world and those who astroproject harassing black people who dont understand  making symbols on their bodies while they sleep is mostly white people of the occult trying to force themselves on innocent black people to fulfill their evil needs or wants,, but a evil minded person always thinks he can do that when he cannot,,, until a person gives you power or authorty or permission  there power is voided,, so they can still have redemption by god through the holy spirit with the anoiting of the holyspirit,, and devils cant cast out devils,,

luke !!;20 but if , I with the finger of god cast out devils no doubt the kingdom of god has  come upon you..

18,, if satan also be divided against himself how shall his kingdom stand

Permalink Reply by Prophetess Dr.Teloria Williams on November 6, 2021 at 3:59pm

Praise Him ! We are living in a time where satan knows his time is short. He is using any and every group of people he can with one mission on the agenda (turn people away from God). Tempers are flaring out of people that were generally rational individuals turning to hatred, murder and the occult practices. It is awful, some of the things people are beginning to reason as okay.( Bizarre!) Praying for you, that the will of God be done. May He plant angels round you to form a hedge of Protection and a Wall of fire that the enemy can't harm you. 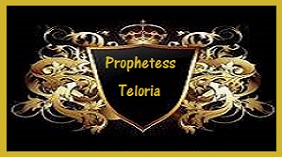 Or (Send a Message) to me Guardian i will send you my Address be Blessed.