Chanukkah is probably one of the best-known Jewish holidays, not because of any great religious significance, but because of its proximity to Christmas. Many non-Jews think of this holiday as the Jewish Christmas, adopting many of the Christmas customs, such as elaborate gift-giving and decoration. Because of this, it is ironic that this holiday, which has its roots in a revolution against assimilation and the suppression of Jewish religion and people, has become the most assimilated, secular holiday on the Jewish calendar.

The holiday of Chanukkah celebrates the events which took place over 2,300 years ago in the land of Judea, which is now Israel. It begins in the reign of Alexander the Great, who conquered Syria, Egypt, and Israel, but allowed the lands under his control to continue observing their own religions and retain a certain degree of autonomy. Under this relatively benevolent rule, many Jews assimilated much of Hellenistic culture, adopting the language, the customs, and the dress of the Greeks, in much the same way that Jews in America today blend into the secular American society.

More than 100 years after Alexander, Antiochus IV rose to power in the region. He began to oppress the Jews severely, placing a Hellenistic priest in the Temple, massacring Jews, prohibiting the practice of the Jewish religion, and desecrating the Temple by requiring the sacrifice of pigs (a non-kosher animal) on the altar. One of the groups which opposed Antiochus was led by Mattathias (Matitiyahu) the Hasmonean and his son Judah Maccabee (“The Hammer”).

This small band of pious Jews led guerrilla warfare against the Syrian army. Antiochus sent thousands of well-armed troops to crush the rebellion, but the Maccabees succeeded in driving the foreigners from their land. According to historical accounts, Jewish fighters entered Jerusalem in December 164 BC. The Holy Temple, the Jewish religious center, was in shambles, defiled and desecrated by foreign soldiers.

The Maccabees cleansed the Temple and re-dedicated it on the 25th day of the Jewish month of Kislev. When it came time to re-light the Menorah (the multi-branched lampstand), they searched the entire Temple, but only one small jar of oil bearing the pure seal of the High Priest could be found. Miraculously, the small jar of oil burned for eight days, until a new supply of oil could be brought. From then on, Jews everywhere have observed a holiday for eight days in honor of this historic victory and the miracle of the oil. The observance of Chanukah features the lighting of a special Chanukkah menorah with eight branches (plus a helper candle), adding one new candle each night.

In the Brit Chadasha (The New Covenant), in the Gospel of John, we learn that Jesus the Jewish Messiah was at the Holy Temple during the “feast of dedication” or Chanukkah: “At that time the Feast of the Dedication took place at Jerusalem; it was winter, and Jesus was walking in the temple in the portico of Solomon” (John 10:22-23).

During this great season of remembering miracles, Jesus pointed out to His listeners that the miracles He had done authenticated His claim that He was, indeed, the long-awaited Jewish Messiah (see John 10:37-38). His works and His true character clearly demonstrated who He was.

Jesus said, “I am the Light of the world; he who follows Me will not walk in the darkness, but will have the Light of life” (John 8:12). The Lord Jesus gives all of us, Jew and Gentile, the “light of life.” And He commanded us to “Let your light shine before men in such a way that they may see your good works, and glorify your Father who is in heaven” (Matthew 5:16).

Should Christians celebrate Chanukkah today? First, be mindful of the fact that we are under no obligation or “law” to celebrate any of the Jewish festivals given to Israel in the Torah (Law of Moses). But to all true Believers in Jesus Christ, especially those who have a profound appreciation for the Hebraic roots of our Christian faith, celebrating the “true light” of this world only seeks to glorify our wonderful Lord and Savior.

Jesus told us that whoever follows Him will not have darkness, but the Light of Life. What a wonderful time of the year to remember and commemorate the great miracle that God has done for us, by giving us new light and new life. 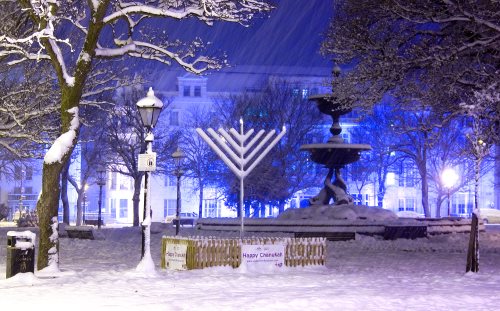 You need to be a member of Guardians Prayer Warriors to add comments!

Hello my friend all Guardians Tag's are FREE to use On your page or add Comment to your friends Page Guardians Ministry is a new ministry that the lord has laid upon my heart to use so that we can reach out to all people.Come and check out Guardians Ministry Click the picture.